To celebrate my birthday, we stayed in a nicer hotel for a change. At 40€ per night, it was well above our average accommodation price, but still affordable. The rooftop pool and view over the airport’s runway were very nice after staying in a hostel in Singapore.

We didn’t plan to visit Yogyakarta, so staying out of the city center was also nice. The island of Java in Indonesia is clearly overpopulated, and we were happy to have avoided Jakarta altogether.

Still, we came to Java to see what it was like, and to Yogyakarta specifically to visit the Borobudur temple, said to be the biggest Buddhist temple in Indonesia, and often compared to Angkor Wat in Cambodia. We later came to understand that “biggest” is not referring to it by size, but by cultural and religious importance. 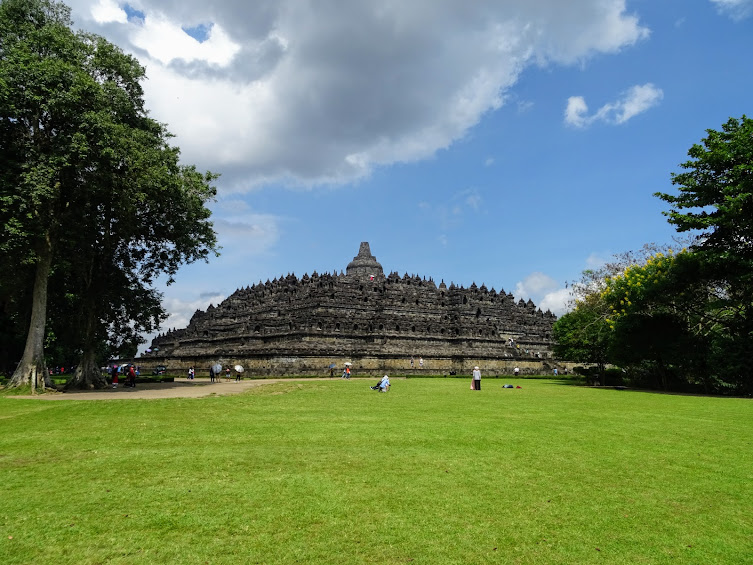 As it is still around 40km from Yogyakarta, we took a “Grab” (Uber competitor) as a safe and cheap way to get us there. Guides can be hired at the temple entrance, which we did and would recommend.

The guide told us all about the temple, and focused mostly on the bas-reliefs, depicting many stories from different reincarnations of Buddha. Unlike Angkor Wat, this temple has no interior, and therefore the visit is done outside, going up the different levels in a clockwise direction. 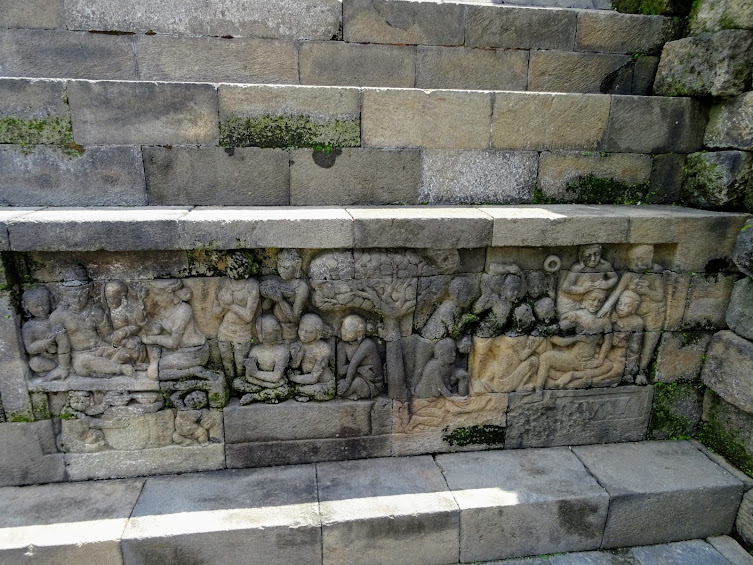 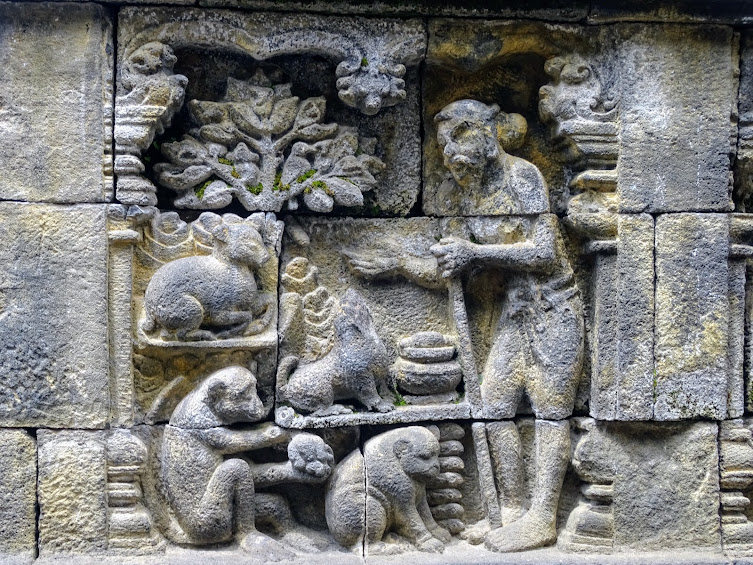 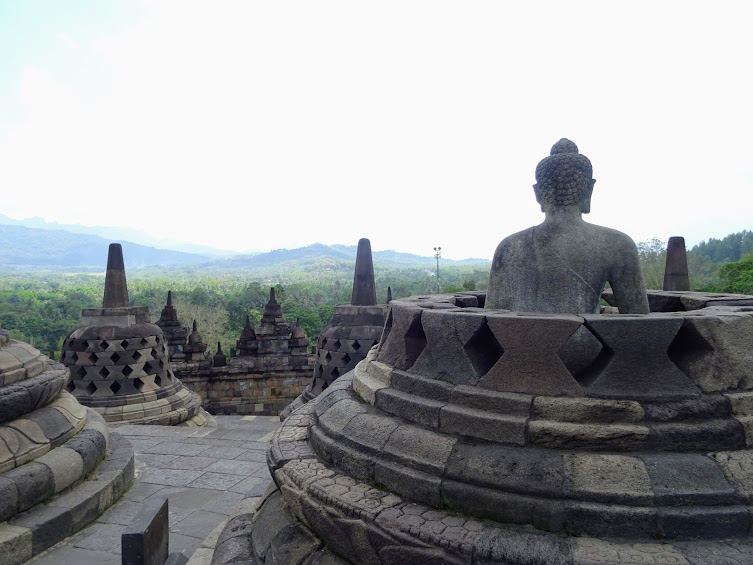 Going back to Yogyakarta we took public transportation, which was quite simple and even cheaper than taking a grab. There were a few other tourists doing the same, which surprised us!

In the region there are other temple complexes, but Borobudur was enough for us with all the other temples we had been to already. 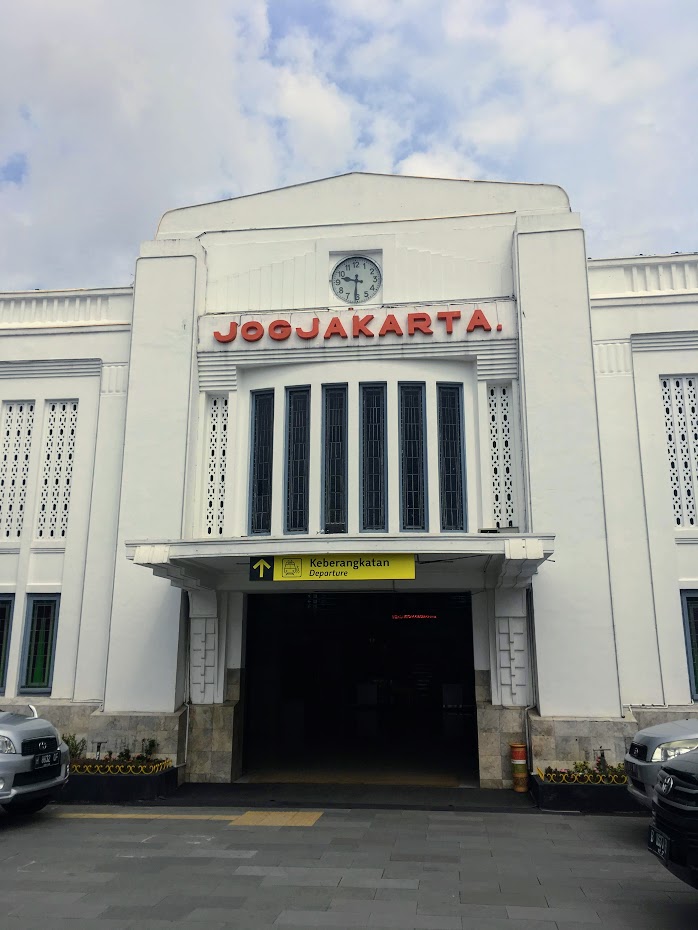 This time by train, off we went to our next stop in Java – the volcano Mt. Bromo.

It was low season to visit Bromo, as the nice owner of our guesthouse explained. Bromo is located next to a very small village, and tours worked by filling a van. The bigger the group, the cheaper the tour. Since there was only two of us, and nobody else likely to join, doing the tour that way would be an expensive proposition. Another option would be to go by public transportation, but the public bus would only leave when full, which meant waiting for an unknown amount of time. The issue would be to get back though, with no guaranteed transport!

We were left with one option, renting a car with a driver, so that’s what we did. Fortunately Grab also has this option. The guy who showed up didn’t really want to go so far, but in the end we convinced him. We ended up chatting with him a lot, which was nice since it was still about 2 hours each way!

When we got to the village they wouldn’t let us go up to the viewpoint by car, as only 4x4s were allowed, so we hiked up. There were a few people working in the fields, which would look and smile at us as we passed by. The surrounding area of Mt. Bromo is a very rural area, and it being low season meant there were almost no tourists. Seeing us walk past meant a quick break from the hard work in the field, if only to exchange a smile.

When we got up to the viewpoint we were greeted with the most amazing view of Mt Bromo:

Unfortunately, it had been cloudy all day, and despite our best wishes, it didn’t improve on our way up. With no point in waiting for the weather to improve, we hiked back down, but this time past the village and in the direction of the base of the volcano. We wanted to at least see it, even if we had to walk right next to it!

The setting is often described as out of this world, as the volcano is in fact next to two others, in the middle of a Caldera (a collapsed larger volcano). Unlike the Ngorongoro crater we visited last year, this one is covered by volcanic ash, no water and little vegetation, making for a very inhospitable setting. 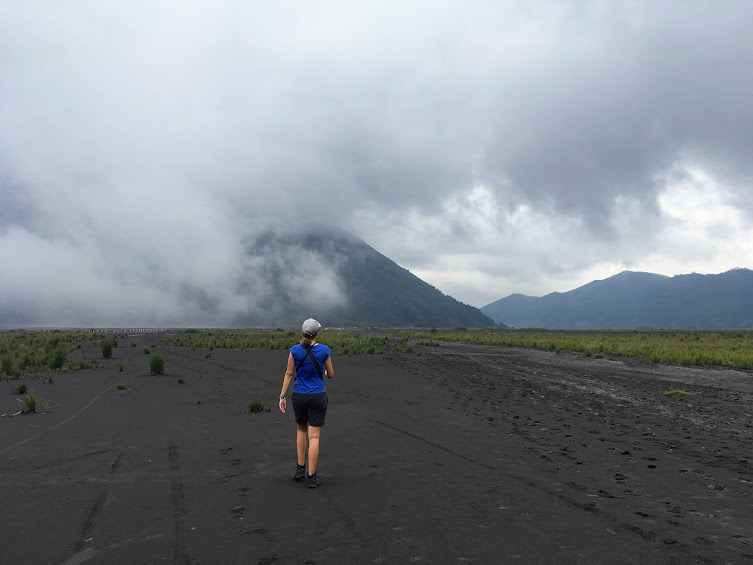 The sky at last became clear enough that we could get a good view of the volcano, but hikes up to the rim were closed due to some recent activity. 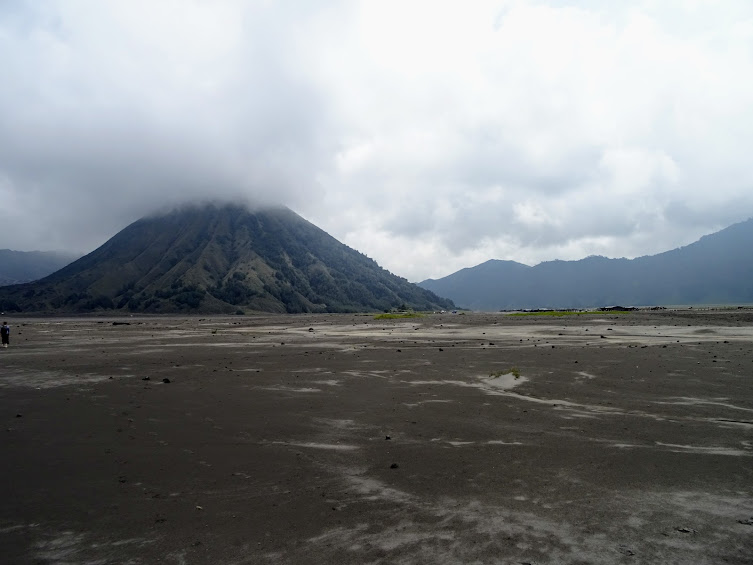 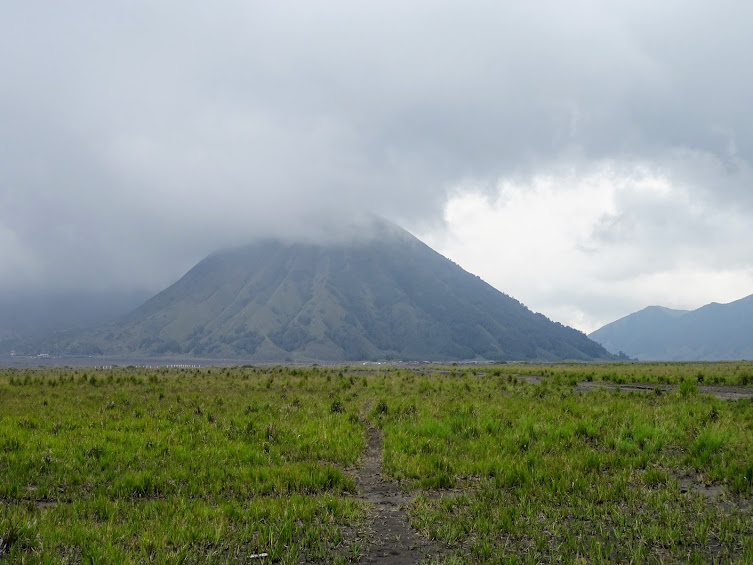 As we were walking in the direction of the volcano, a thunder struck so loud that we actually thought it was a noise from the active volcano. Since we were already close enough and smoke was coming out, we decided to turn back.

Our driver waiting for us, we made our way back to the guesthouse, ready to take the train next day to Bali!