After we crossed the border from Laos to Thailand, the first stop was Chiang Kong. It was more of a “technical” stop to break down the trip to Chiang Mai than a touristic one. For 5€, we stayed in a quiet bungalow, and had a very nice pool almost to ourselves! 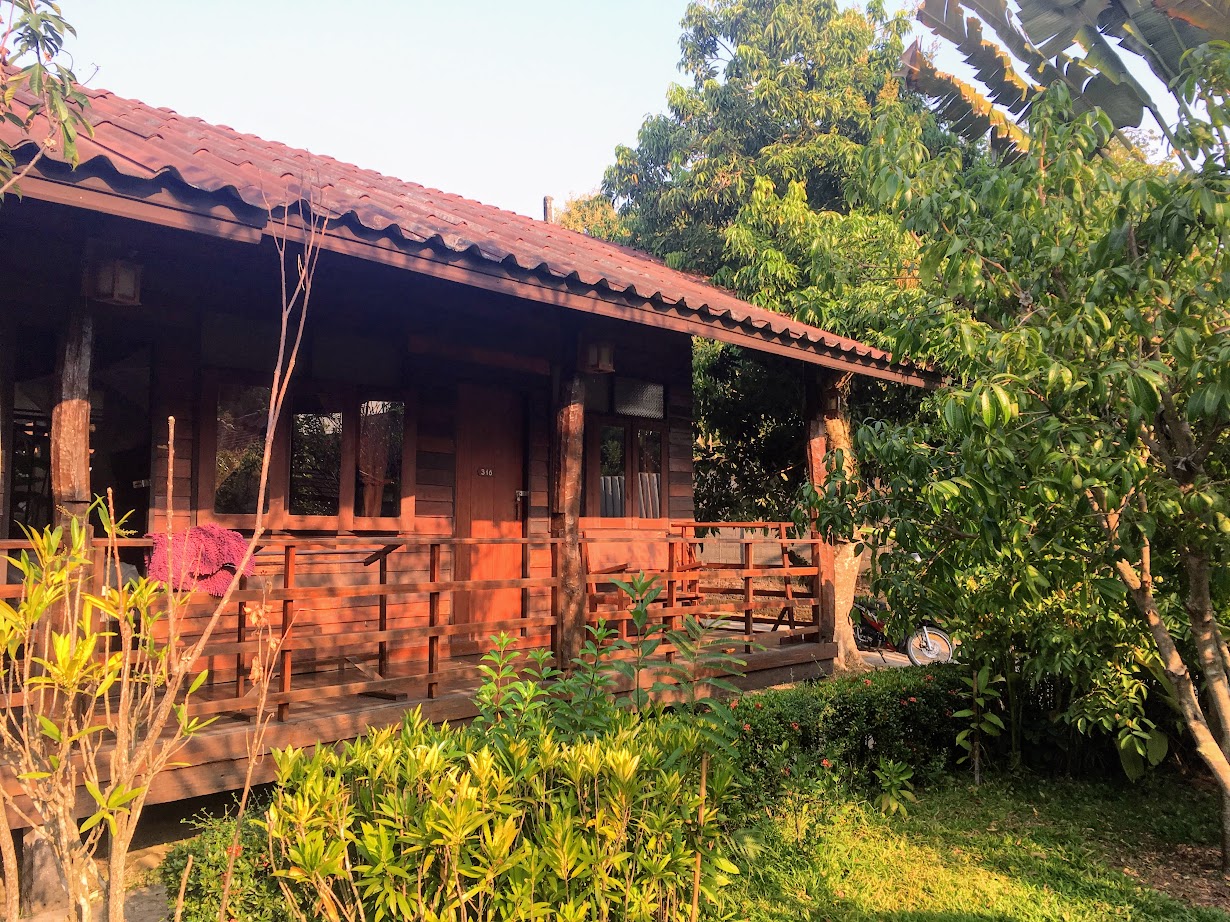 What followed was another bus trip, this time to Chiang Mai. As soon as we arrived, we realized we had come back to the frenetic rythm. We met a Portuguese that advised us to use a mask, since aparently the air quality was terrible: “Worse than in Bangkok!” he said. I was thinking to myself I wanted to get out of there, since I knew how terrible our stay at the Thai capital was.

We had chosen a room only with a fan, which was a terrible choice. We decided to cancel the second night and booked another hotel, with air conditioning. We swore not to repeat the same mistake! Regardless of the difference in price, a good night of sleep is more important.

Chiang Mai was no better than Hanoi or Ho Chi Minh. Between the end of February and the beginning of March they burn the fields, and we had read already it was a bad time for trekking in the surrounding natural parks. Combined with the fact that we had recently spent a day jungle trekking, we decided to explore only the city.

There is not much to see. Temples and more temples! 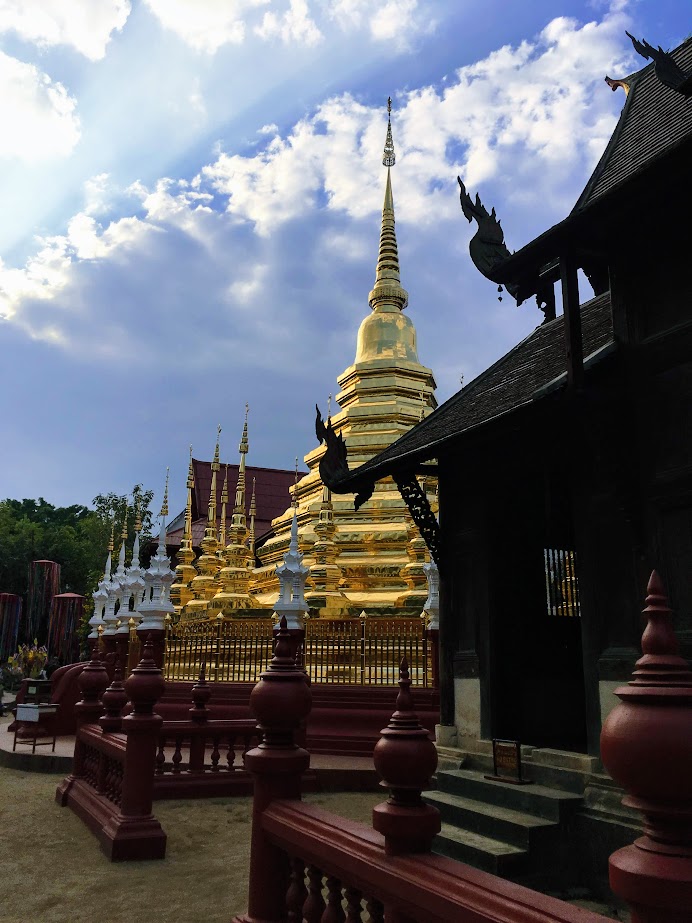 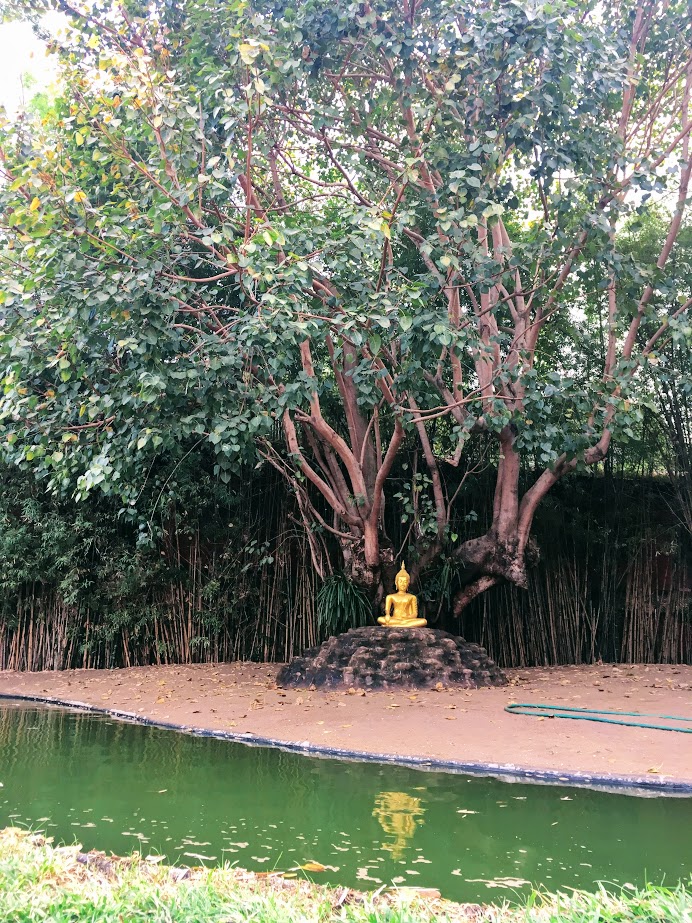 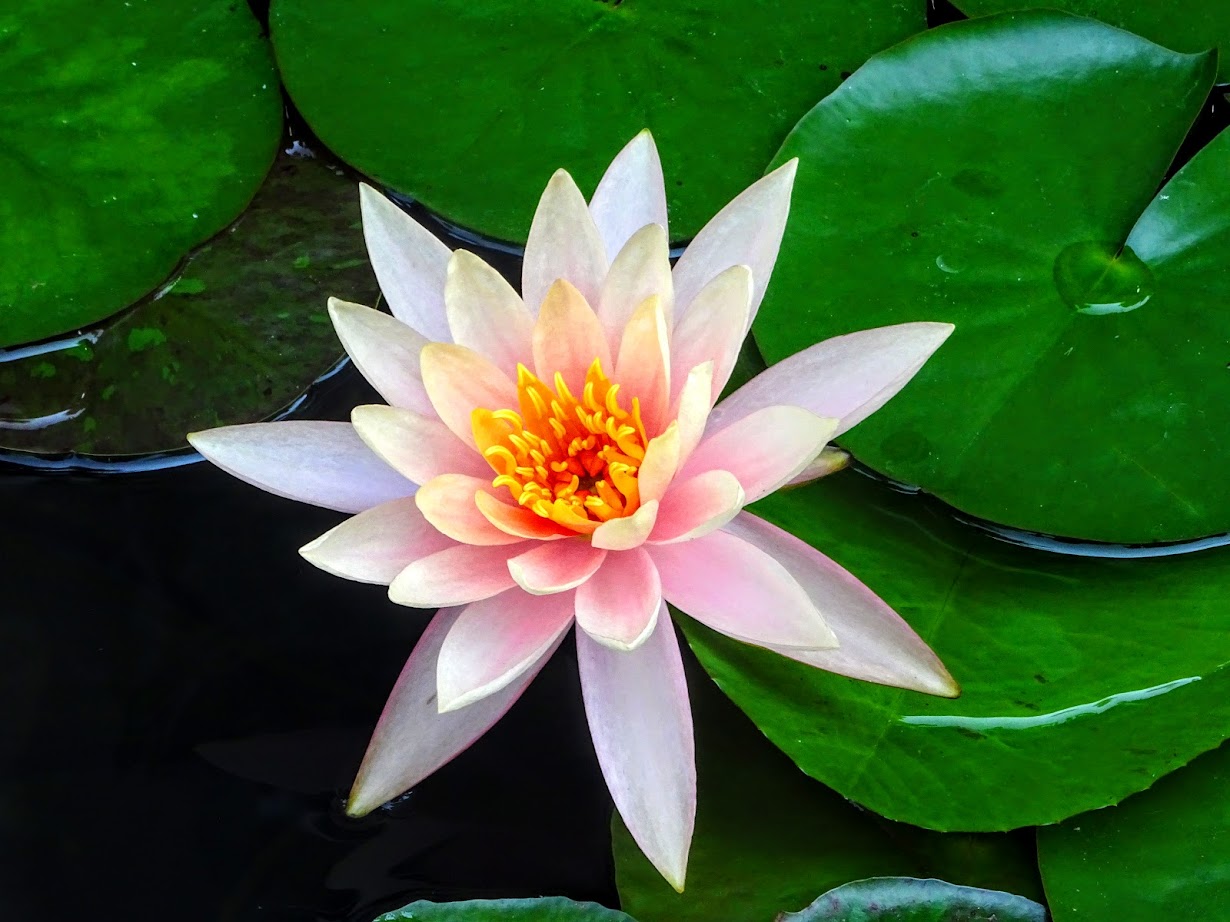 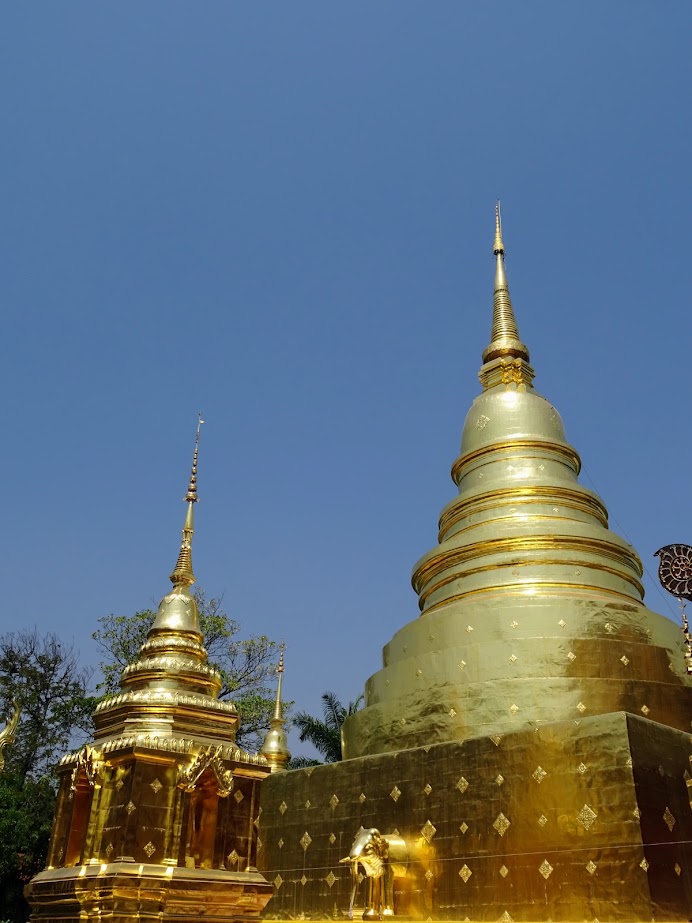 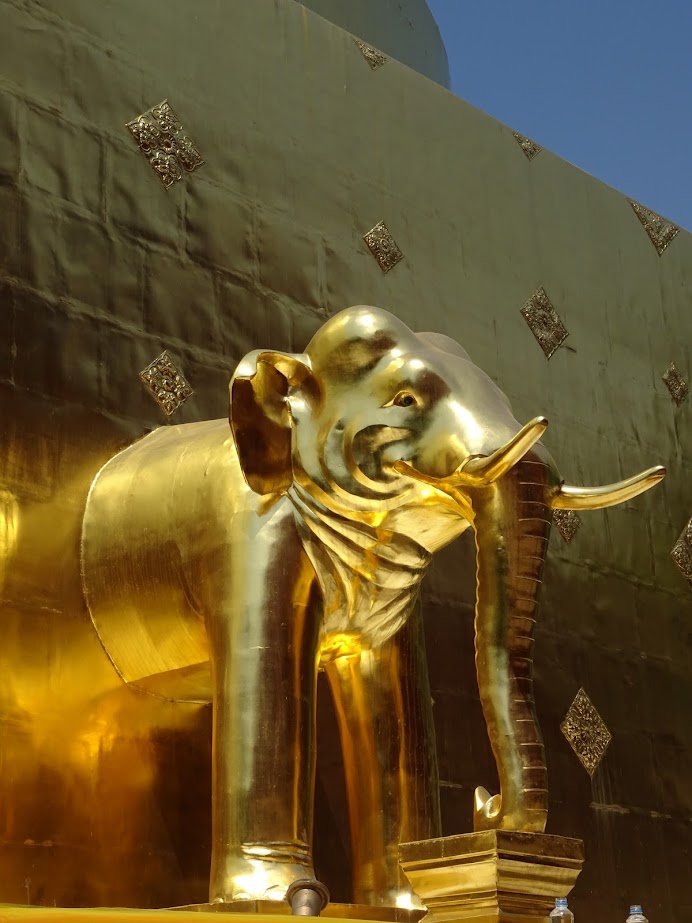 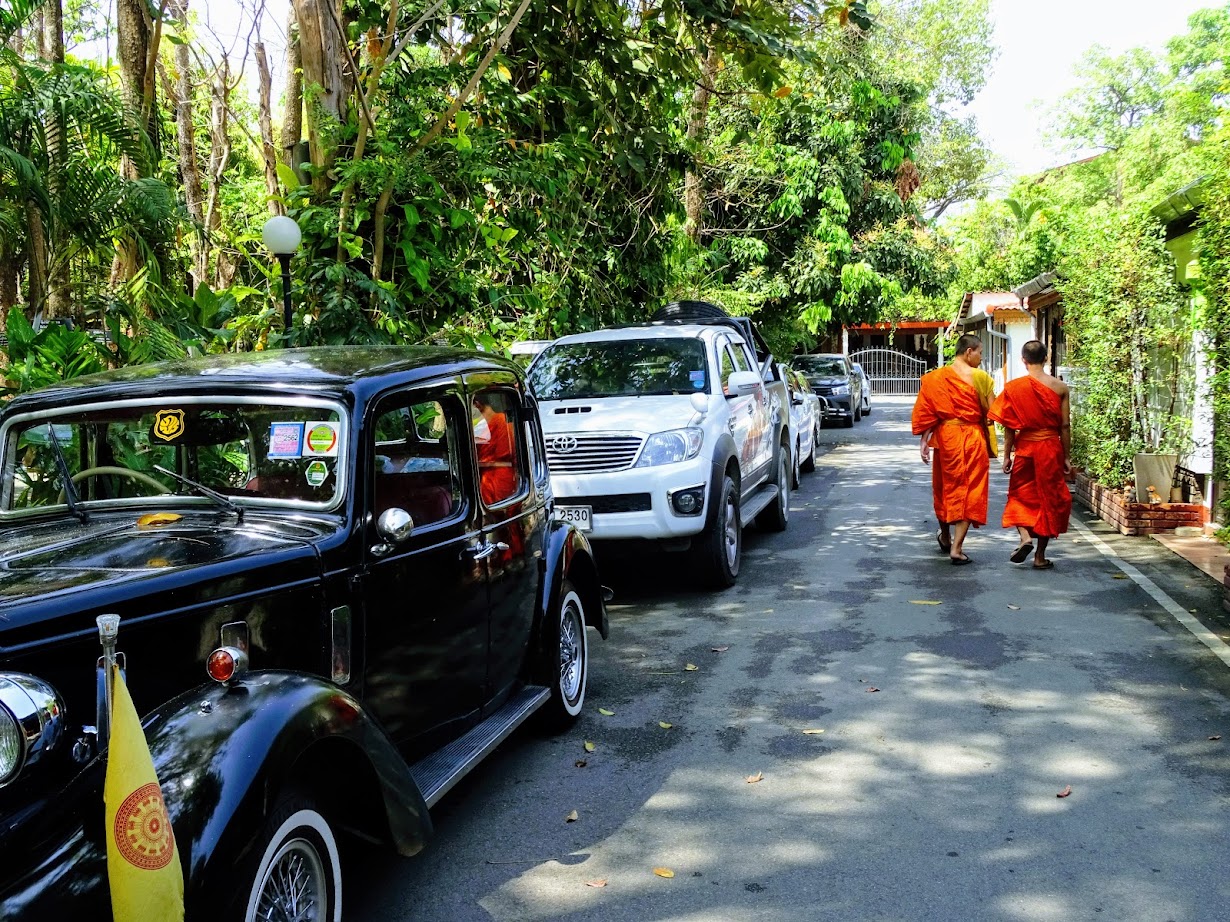 Even so we tried to make the most of our stay in that city, and ended up having a nice experience in one of the temples.

“Yesterday, in one of the many Buddhist temples we visited, something new happened.

Barefoot, we entered. “Hello”, said to us a man sitting in a plastic chair by the entrance. “Take a picture”, he added, waving towards the many Buddha images at the end of the hall.

We answered with a shy greeting and continued our visit. To really enjoy visiting temples was hard for us by now, especially with the heat in the middle of the day. The temples started to all look alike. The same golds, the same reds, the same Buddhas of a thousand sizes, postures and colors.

Nevertheless, this visit was different. After the pictures, the man in the plastic chair said something to us again, with a great smile on his face.

This time we answered more enthusiastically and accepted his invitation to sit on the other two plastic chairs that were empty by his side. He told us his story.

He had volunteered at the temple for 15 months and dedicated 50% of his time to spreading happiness and knowledge of Buddhism. Self-proclaimed peace engineer, a profession that suited him very well, and a profession that should be more widespread throughout the world. He had done a Master’s degree in Buddhism, after a Bachelors in Engineering.

Not  someone you meet every day!

He explained the three basic principles that Buddha taught about 2600 years ago:

Not to do bad
To do good
Purify the mind.

Three simple principles that, even today, continue to be extremely necessary. More than simply not doing bad, doing good, and purifying the mind through meditation, that is no more than discovering ourselves and to live in the present.

Everyday life makes these principles hard to follow. We have a “monkey mind”, incapable of focusing on the present. We are constantly thinking what we did, either good or bad, or thinking about the future. Because there is so much to do and so little time (or it seems so little, due to the pace we live in). To comprehend and accept human nature and the nature of things is the way to nirvana, or enlightenment. He told us that this enlightenment is not unattainable, something that no one can reach. After all, Buddha was only a man, and in the most purist form of Buddhism, he has no godlike super-powers, what makes this relegion, at least in this point, different from the others.

One simpler religion, without heaven or hell, that makes the most of the present as it is. As the other religions do, it also searches for that reward, that nirvana, that true happiness, through the good acts that we do upon others and the purity of our spirit.

That talk was like reliving the catholic Sunday school, where we also debated who we are, what we do, the reasons that brought us here in this moment, and if what we are doing contributes somehow to improve the lives of others.

Quickly he concluded that he was making us smile, and that we were making him smile. Just like that, with such a simple gesture, we improved our lives mutually. That is the role of a peace engineer, he concluded.

“And if everyone else tried to do the same, wouldn’t we live better?”, we answered “Yes, much better!”.

After this conversation so unexpected but so full of meaning, we continued our lives, carrying on questioning who we are, what we are doing, why we are doing it or how could we do good around us, wherever we are.” [Posted on facebook, 10/3/2019, in Portuguese] 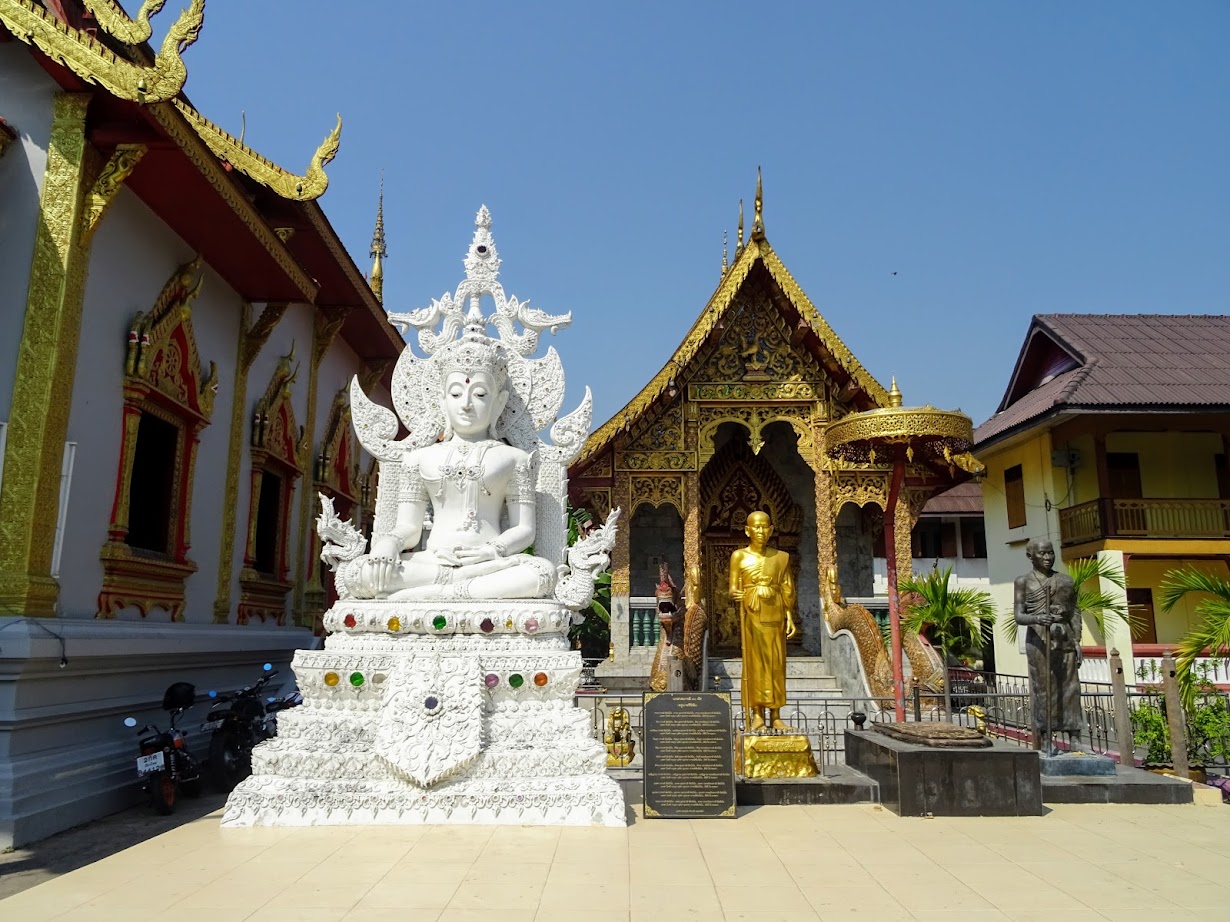 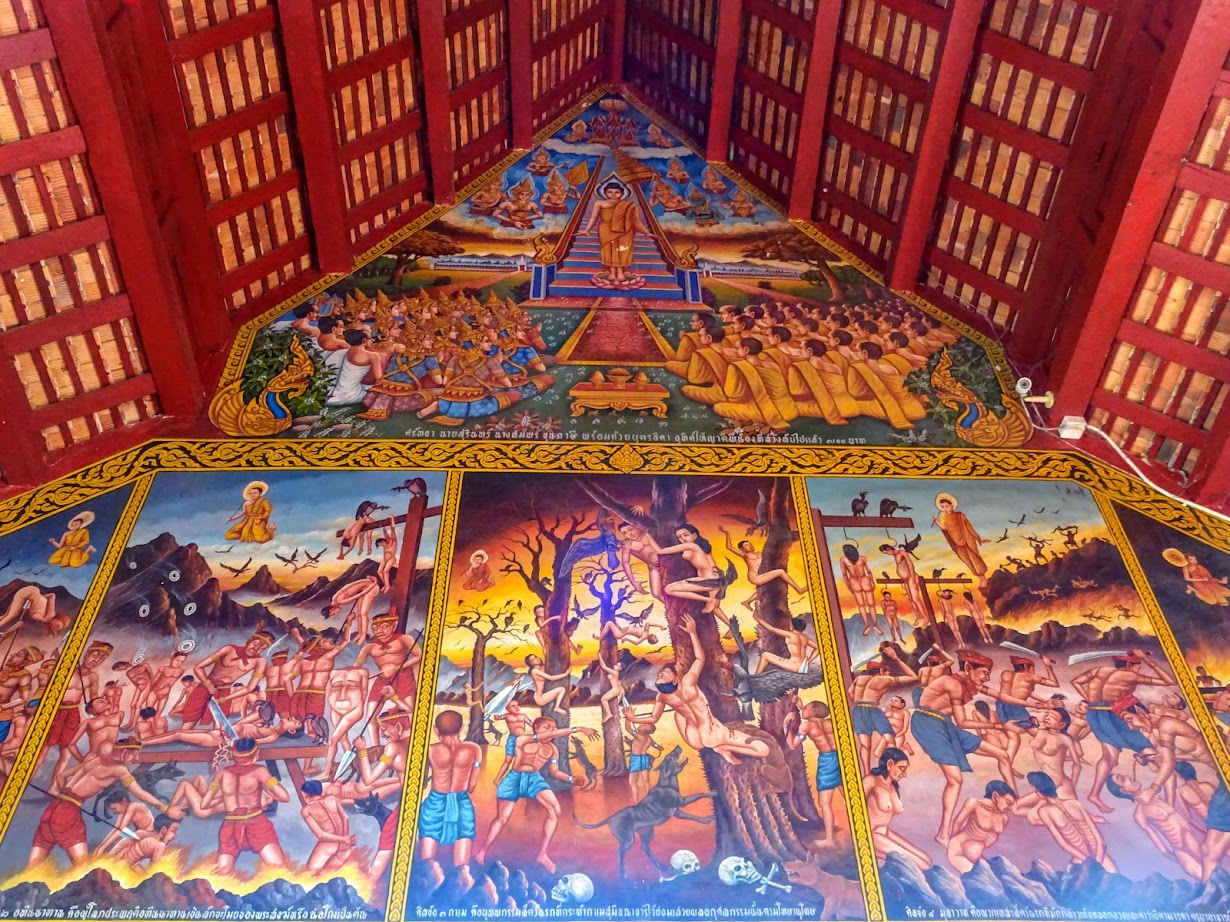