After two days of mostly travelling in the truck, we arrived at a campsite close to Dar Es Salaam, facing the Indian Ocean. We didn’t get a chance to visit the city, but passing through was quite chaotic and there was a lot of traffic.

On that campsite we had a first taste of how nice it is to camp right in front of the beach. We went for a swim in the calm warm waters, and prepared for the next day.

The following morning we left camp later than usual, at 10:30, since our ferry to Zanzibar was only at 12:30. Our camp was in a peninsula, so we took a short ferry across to Dar Es Salaam. Despite being a very quick journey (less than 10 minutes) it saved us a lot of time, and allowed us to see how the locals cross to and from the peninsula, for less than $0.10 USD. 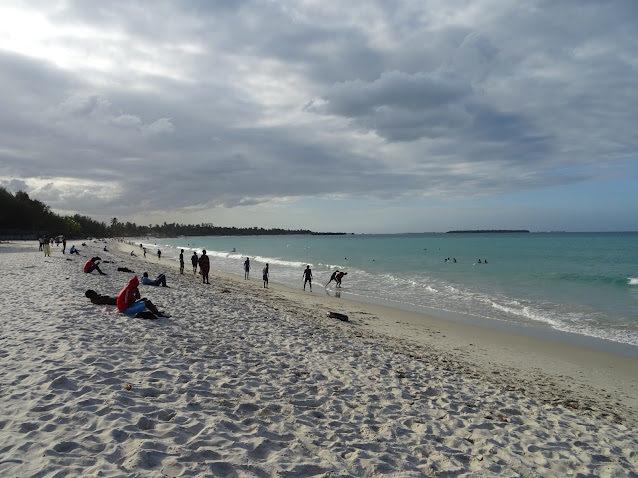 Taking the boat to Zanzibar went better than expected, since some members of our group were scared of getting seasick. The ferries were very modern and stable, taking about two hours to cross. The price is $30 USD each way and was included in our trip (there are cheaper slower ferries, and it is also possible to fly to Zanzibar).

Since we arrived well past our usual lunchtime, everyone was quite hungry. After a quick check-in at the Safari Lodge hotel, we headed for our first activity, the spice tour. Fortunately the first part of the activity was lunch!

Zanzibar is known for it’s spice plantations, many of which were introduced throughout it’s long history as a main port. In Stone Town, Zanzibar’s main city and our stop for the first night, both Arab and Indian influences shape the architecture, the culture and the food. For lunch we had the chance to try many of the local dishes in small portions, in a kind of “degustation buffet”. The food was good in general, but some of the dishes we didn’t really enjoy. It is sometimes hard for me to appreciate food with too many spices, as in Portuguese cuisine we try to amplify the natural flavor of the main ingredients.

After lunch, we headed out for a tour of the spice plantations, which was both informative and very entertaining, mainly due to our great guide, Ali. Ali spoke very good English, and managed to imitate a proper British accent in some key phrases, getting laughs out of everyone. He showed us around different plants and trees, shedding light on where products we eat come from. For example, I had never stopped to think where cinnamon comes from, but it is the bark of a tree! We smelled and chewed on it, and went on our way to see nutmeg, lemongrass, ginger and many others. 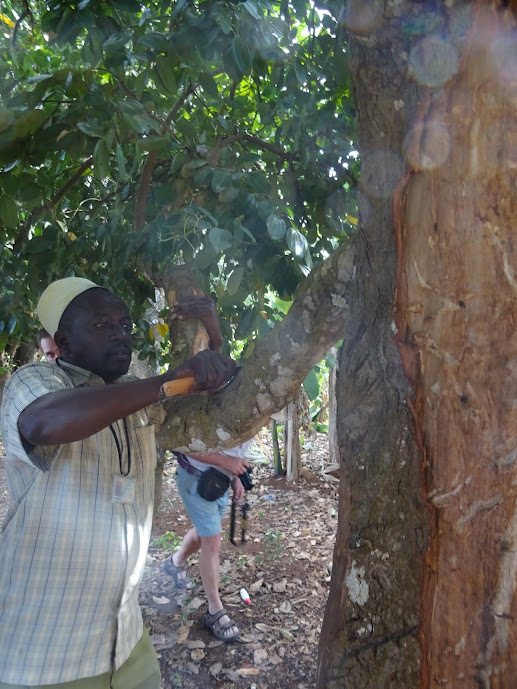 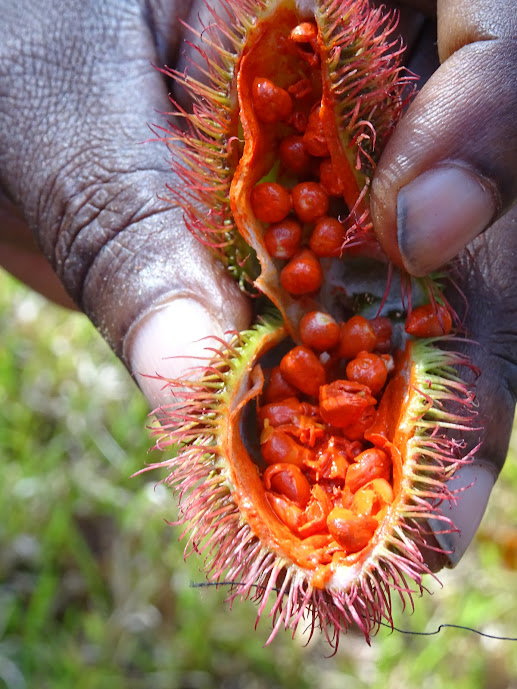 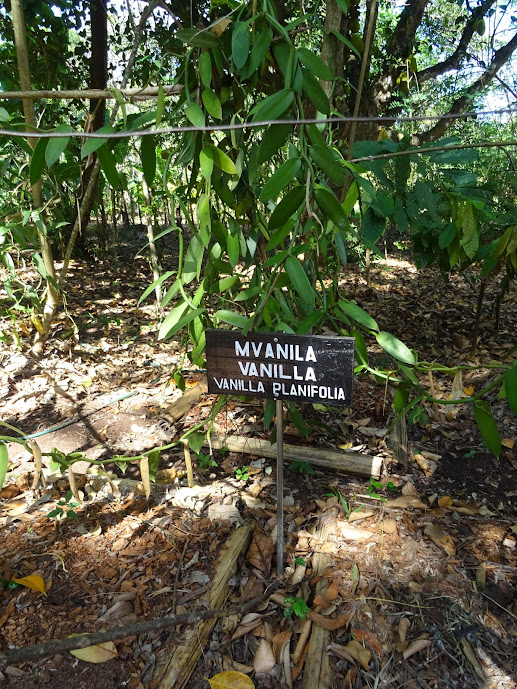 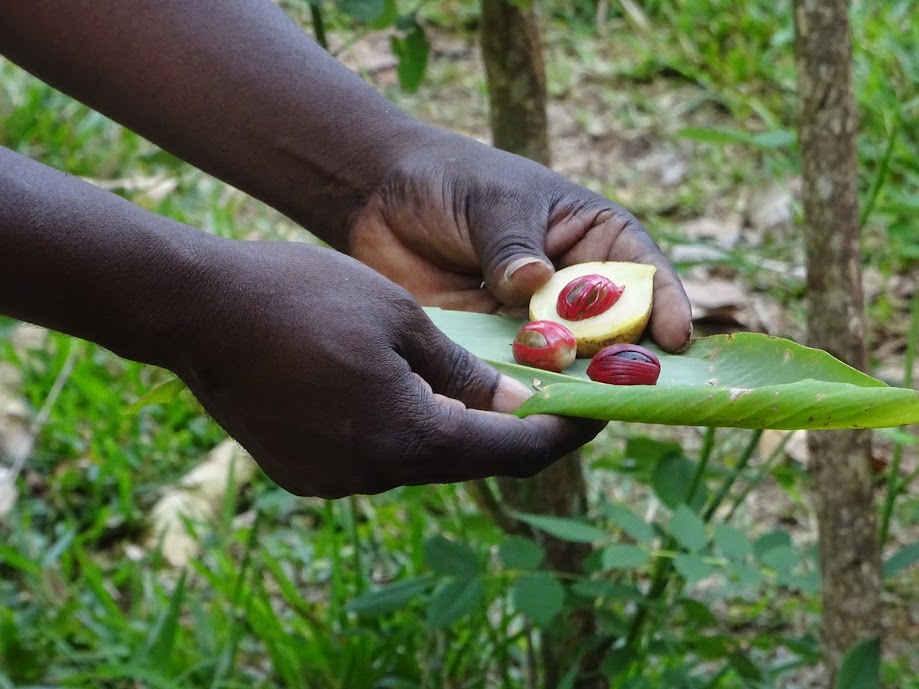 Back to Stone Town after the plantations, we had a very short guided tour through the town. It is picturesque, but not as much as our trip guide built it up to be, even in the center there are many dirty, narrow, degraded streets. By the end of that tour the sun was already down, and the night market was buzzing. On a square facing the ocean, the locals put up food stands full of street food. We all had dinner there, each of us wandering around and buying what and where he pleased. After bartering on a few different food stands, me and Margarida ate a chicken and a fish skewer with a garlic bread, all for less than $3 USD (we payed in Tanzanian shillings). 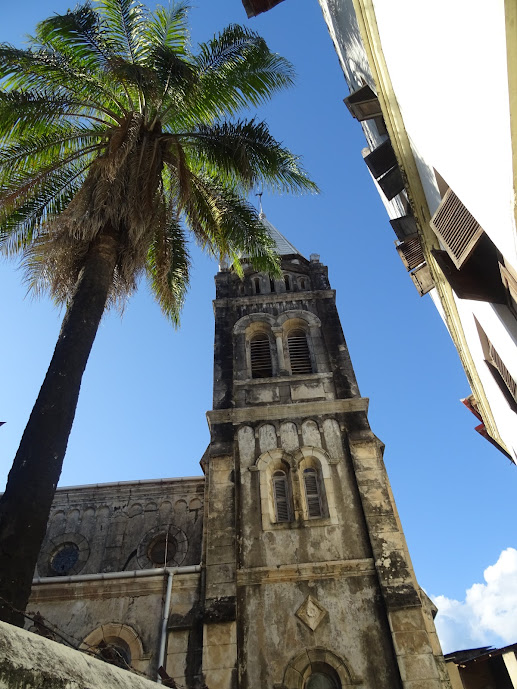 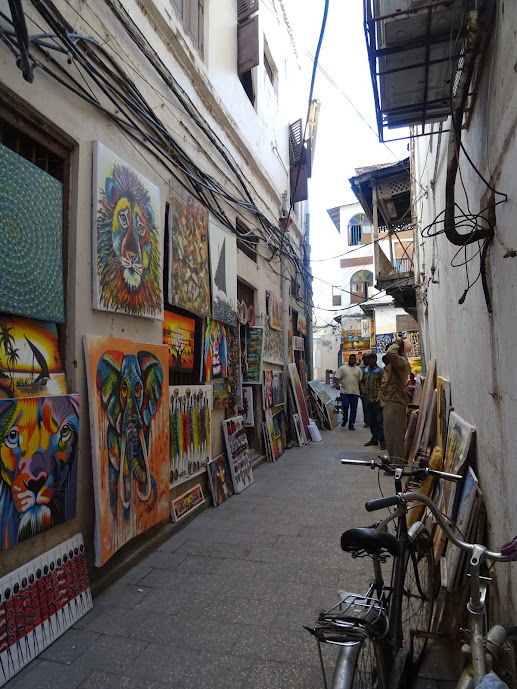 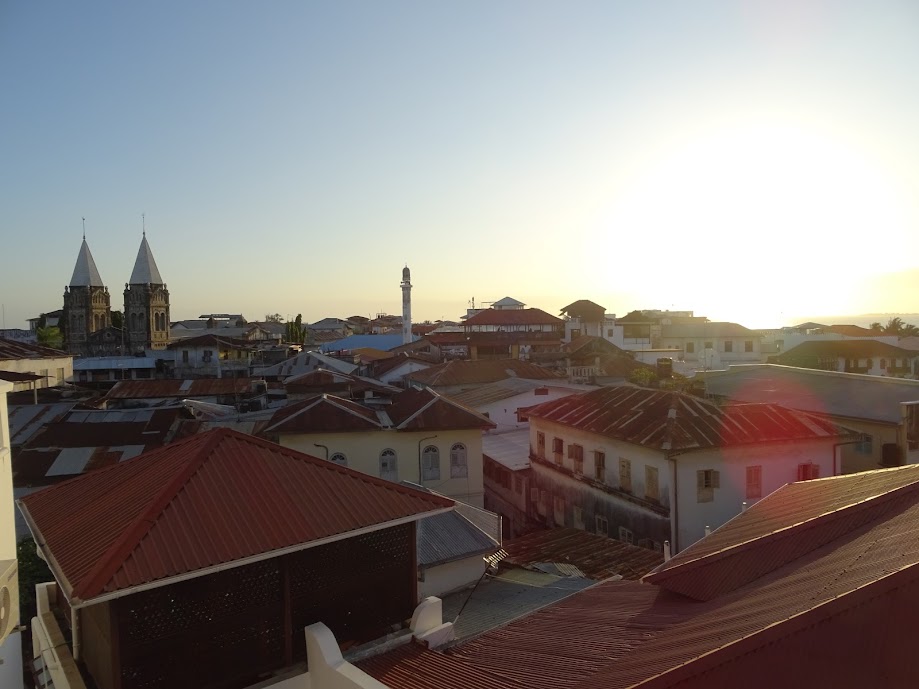 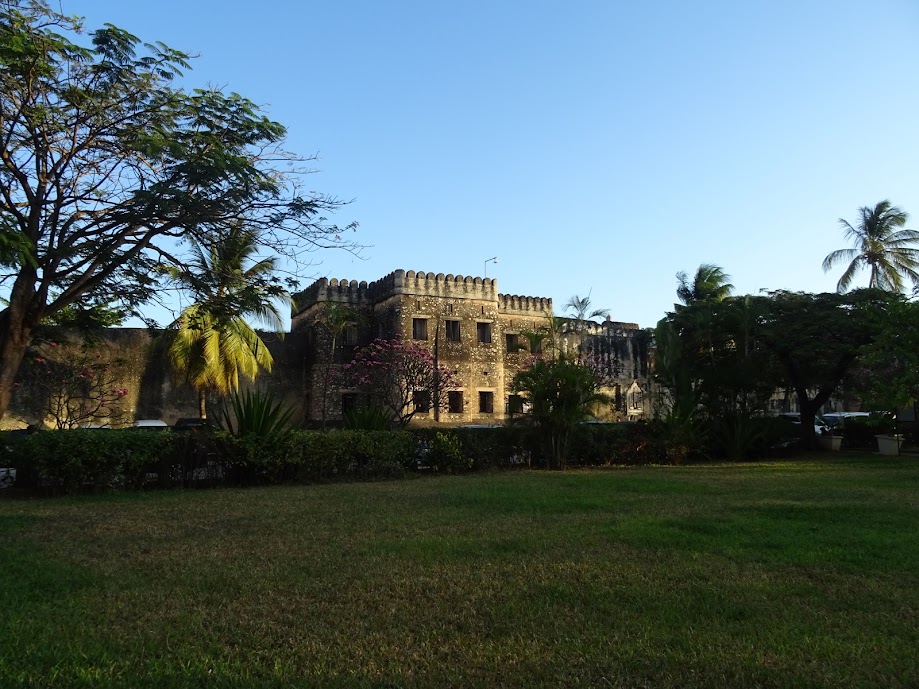 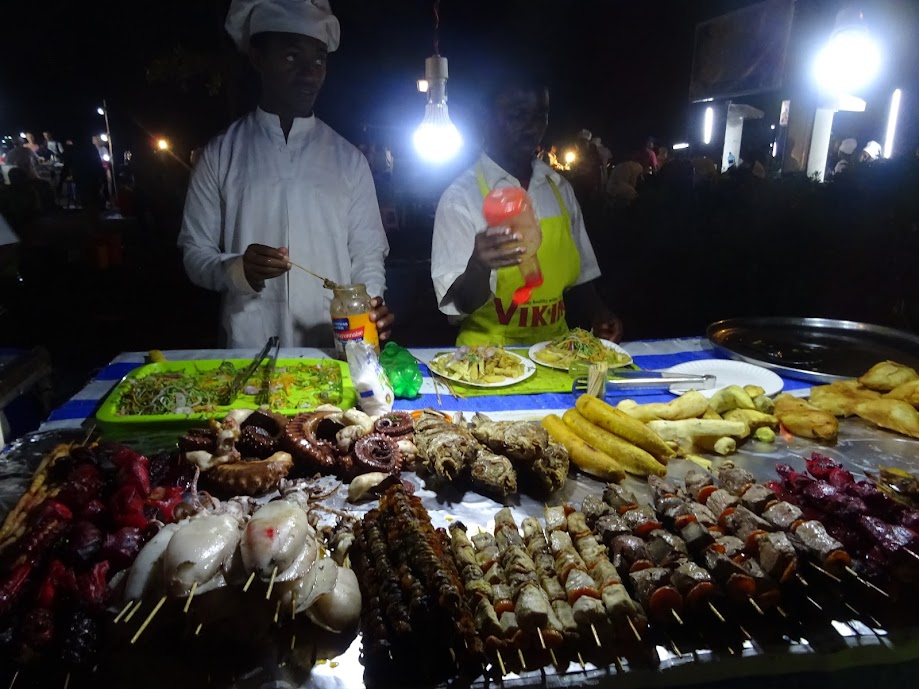 The next morning, part of our group headed to swim with wild dolphins in the open sea, we opted for a visit to prison island. Ideally meant to be a prison, this small island next to Zanzibar ended up serving as a quarantine area for those with yellow fever. These days it has a hotel and a sanctuary for giant land tortoises, the reason for our visit! The trip to the island was $10 USD each and another $4 USD for the entry to the sanctuary. 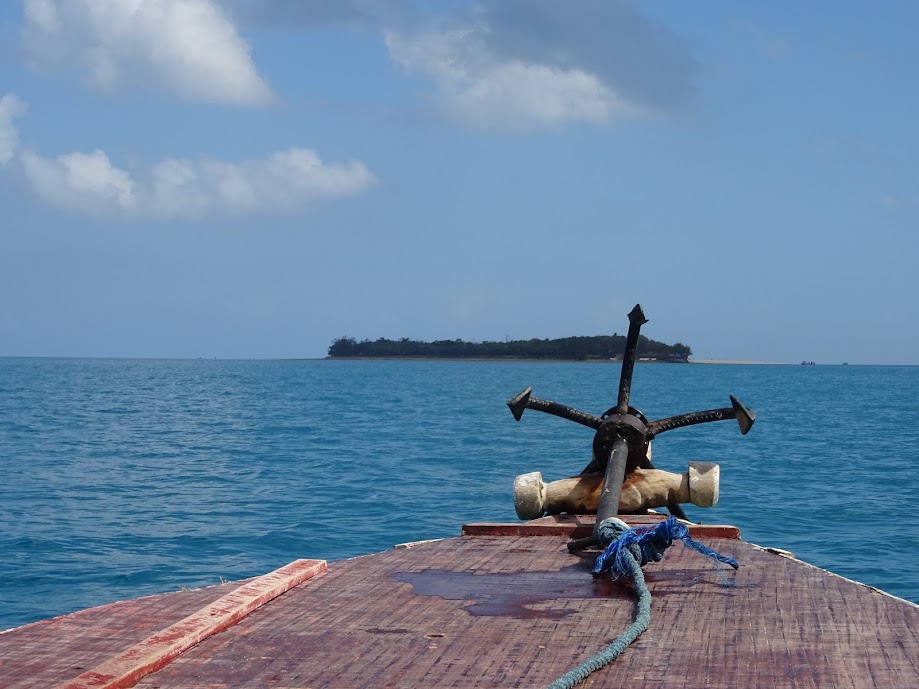 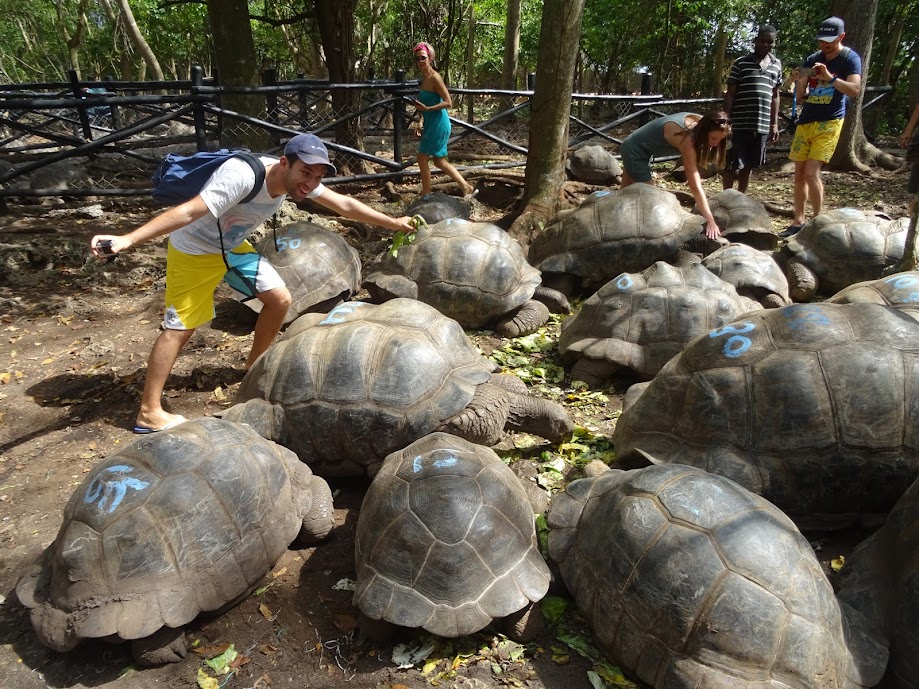 We also had a chance to feed these amazing animals! The oldest one there was 194 years old! 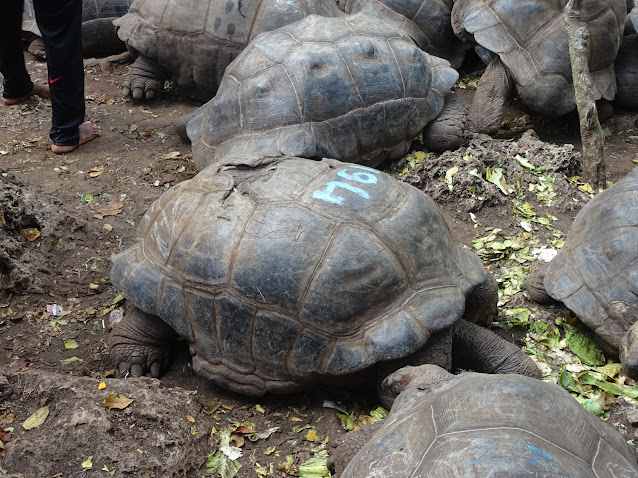 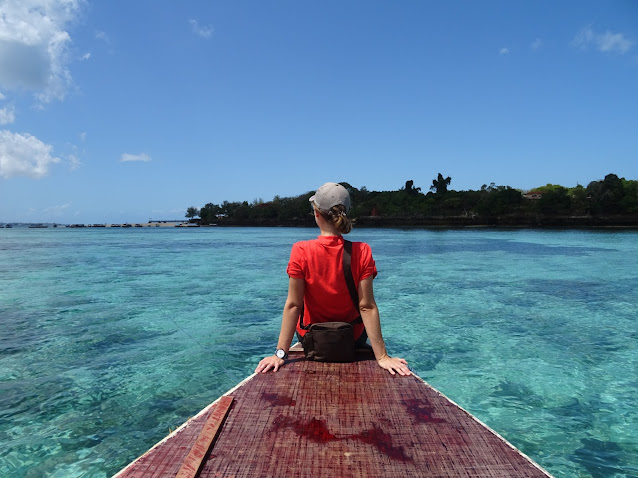 After a short swim next to the island, we headed back to Stone Town, checked-out of the hotel and got into a transfer to Kendwa, in the northern part of the island, which took about 2 hours.

For the next two nights, we had a little taste of paradise. The sand on the beach was the whitest and finest I ever saw. The water was not too warm, but easy to enter and still refreshing. There are corals quite close to shore, and included into our tour we had a snorkeling trip which allowed us to see many different and colorful fish. 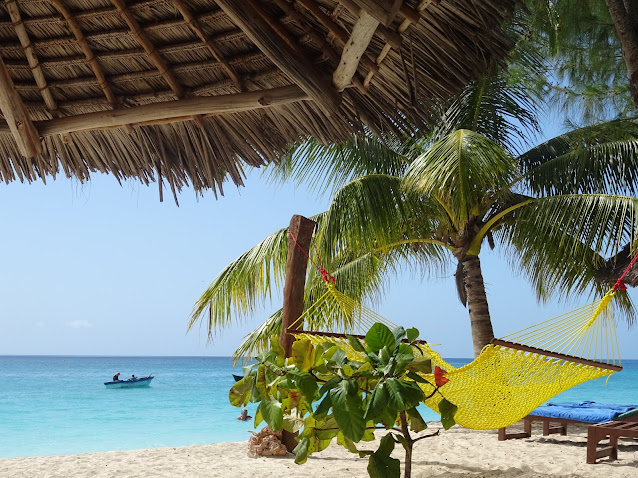 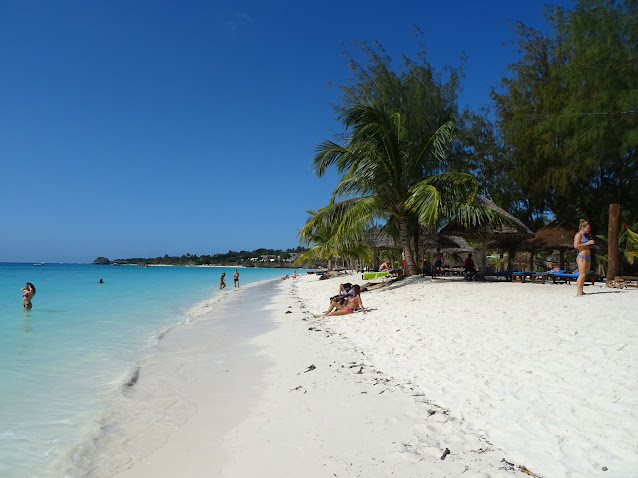 What we saw of Kendwa was mainly the resorts on the beach, one after the other. Unlike some other places, these resorts are not made up of tall hotels but more traditional low buildings, which makes you forget you are in a tourist destination. The local population also shares the beach with you, as it should be.
Since meals were not included we also ate out. One of the dinners we had very good grilled fish (about $10 USD for two). One of the lunches we tried to find out where the locals eat, and we did, but unfortunately they didn’t have fish. We had half a chicken, some potato chips and rice for about $4 USD. 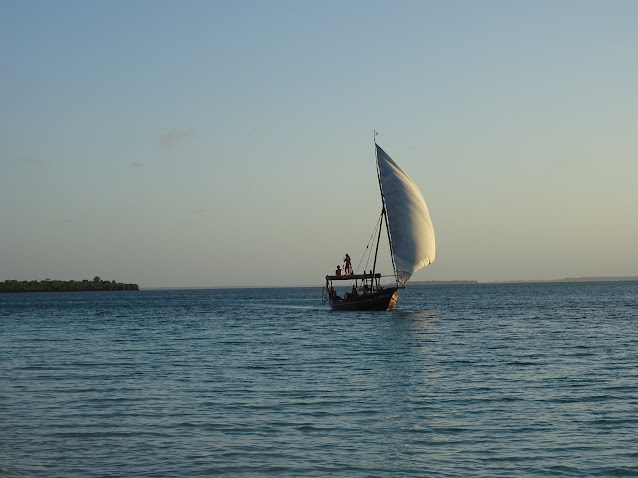 On the last evening we did a sunset cruise on a traditional sailboat, with a group of drummers warming our ears. Fortunately this was also included on our overland tour, since I don’t think it was an option we would have done, but it was a great way to end our stay in Zanzibar! 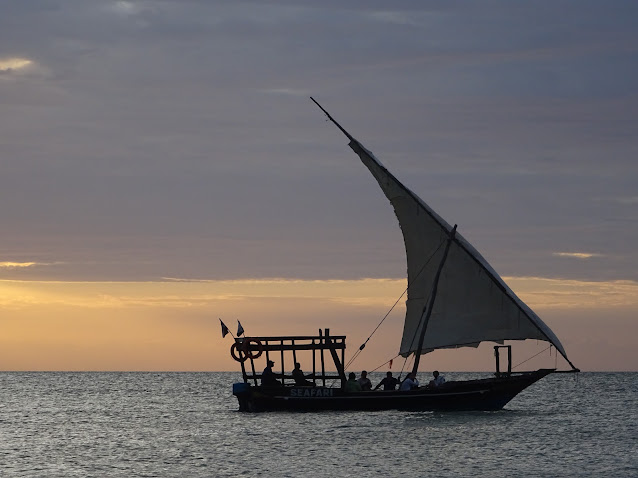 The following day was spent driving back to Stone Town, taking the ferry to Dar Es Salaam, the second ferry to the peninsula and the final drive to camp.

All of these long transfers and drives on the overland trip have a silver lining: we have long hours looking at the scenery and engraving the memories of all the wonders we just experienced.